Festival in the Shire

© The Festival in the Shire TM
Well, I'm back - not to the Shire but from it. 'It' being three days of Tolkien filled fun in Wales. If you've been following this blog you'll know I was exhibiting in the Art Exhibition there and have come back thrilled to be hanging amongst such terrific art. I've decided I should give up painting fantastic trees after seeing Rodney Matthews' 'Old Man Willow' but I guess I'll just have to do better! I have to thank the volunteer organisers for hanging my work and setting up my prints and cards for me in the Festival Shop. You were heroic.

I also had a new print there - yet another Tolkien painting I did a while ago but never got around to making a print of - Gollum: 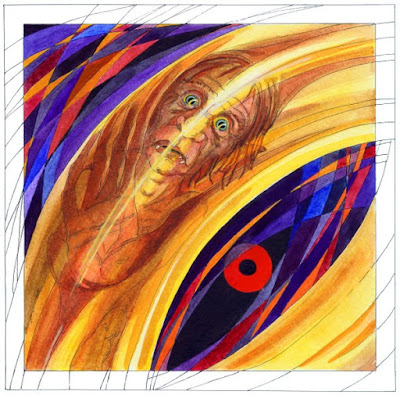 Gollum is looking somewhat freaky here, he's seen reaching out for the Ring while reflected in the Ring itself. An image showing him trapped by it's power. The Ring is also seen reflected back in his eyes and to add to the tension, the Eye is looking out from the centre of the Ring. Enough to give anyone bad dreams! The limited edition giclee prints are available now from Galley Hill Art.

All in all I was very pleased with how the exhibiting went and sold enough prints and cards to feel reassured that my work was enjoyed.

BUT - it wasn't all exhibiting, of course. There was a fantastic Conference where papers were given by (amongst others) Tom Shippey, Verlyn Flieger, John Garth, Colin Duriez and Cary Olsen. I admit I was in seventh heaven (is there an eighth heaven? I might have been there too...). I learnt so much, there was plenty of laughter along with the scholarship (did I mention Tom Shippey?) and one talk that I will never forget from John Garth, who read a very carefully put together series of excerpts of the letters of Tolkien's great TCBS friend, Robert Gilson. Gilson's niece was in the audience as we followed his time at school with Tolkien, through to his army training, journey to the Front, his hopes and fears. Gilson died in the first major push at the opening of the Battle of the Somme and hearing his own words as he prepared for battle in the horrific mud of the trenches, was unbearably moving. I'm hoping, like everyone at the talk, that there will be a book so that these very well written letters can be shared. 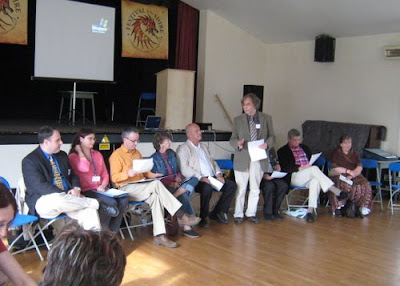 Outside the Conference there were many other smaller talks, music, storytelling - how wonderful to hear Beren and Luthien told out loud from memory! - and re-enactments. All this and beautiful scenery too!
Posted by Sue W at 10:58 2 comments:

Yet another Tree of Life 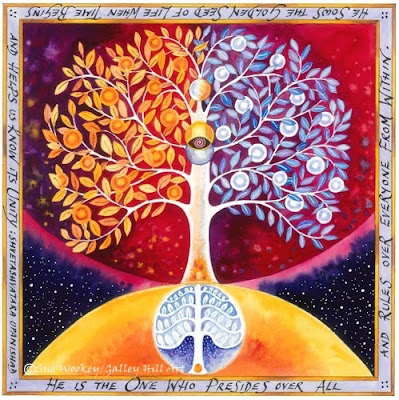 And yet another attempt at Life, the Universe and Everything. One day I'll stop painting the Tree of Life.... OK, you're right, I probably won't! I think there are several Trees left in me yet. Maybe an entire Forest.

This painting started off as an attempt to create a less stylised Tree. Really worked, huh? Once again we have the balance of opposites within the Tree (which of course represents all Creation), but this Tree is bearing suns and moons as its fruit. It's springing up in all it's profusion from a small version of the simple Indian Tree I painted a couple of years ago, based on an ancient Chola Bronze. A simple archetype from which an endless variety constantly evolves. Today I read the words of someone who compared the manifest universe to God's clothes, a glorious robe through which we can see Him and which also envelopes us. Makes it even more important that we don't pick holes in it, eh?

The words around the border are from the Shvetashvatara Upanishad and read:

He is the One who presides over all
and rules over everyone from within.
He sows the golden seed of life when time begins
and helps us know its unity.

Prints (in glorious technicolour) of  The Golden Seed are available from my website at Galley Hill Art
Posted by Sue W at 17:56 4 comments: