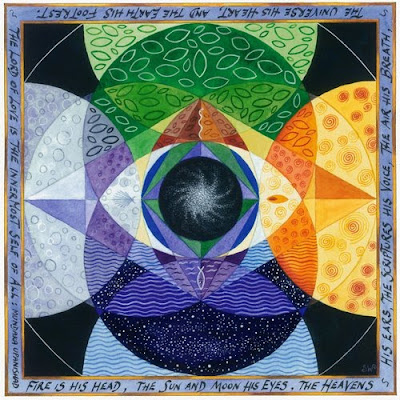 It's a bit ambitious to paint the start of Life, The Universe and Everything but, hey, what's to lose? This painting is based on the ancient and complex symbol of the Vesica Piscis - two interlocking circles of the same radius which create a Mandorla (or almond) in the enclosed space between them. See Wikipedia here for more. It looks simple but the shape is the basis of sacred geometry, the mathematical creation of the 6 platonic solids and the symbols of the Seed of Life and the Flower of Life. For more on Sacred Geometry see here. The Vesica Piscis and the various forms that spring from it are found in many places and religions around the world. You can see a well known example on the cover of the Chalice Well in Glastonbury (that's a dreadful pun...).

I've painted it exploding with the Birth of Life, with the elements of  Earth, Air, Fire and Water and also managed to bung in the Sun, Moon, Earth and Stars (once can never paint too many moons...). By applying some of the rules of sacred geometry we get a great cosmic eye in the middle. Think cells dividing, atoms spinning and 'Thus spake Zarathustra' playing very loudly in the background.

The words around the border are an ancient Hindu text:


Fire is his head, the sun and moon his eyes,
the heavens his ears, the scriptures his voice,
the air his breath, the universe his heart,
and the earth his footrest. The Lord of Love
is the innermost Self of all.
- Mundaka Upanishad

If you haven't read the Upanishads you haven't lived.
Posted by Sue W at 09:54 6 comments:

Limited edition, signed giclee Prints of Treebeard are now available from Galley Hill Art. It was quite a task getting all the subtle shades of green, grey and brown just right on the print but I finally got there after I don't know how many attempts! As Treebeard would say, 'Don't be hasty'.
Posted by Sue W at 21:02 No comments: