What do you do with an 8 legged horse?

Well - with raven references seemingly cropping up everywhere I look and crows divebombing my car everytime I go for a drive, I've decided that it's time I took note and contemplated my inner raven (don't blame me, blame the universe. Sometimes it's just very wierd). So I've been practising my drawing skills by exploring raven folklore and myth, starting off with Odin and his two faithful ravens, Hugin and Munin (Thought and Memory). How great to have a couple of ravens looking after those for you. Actually, ravens are very nice to draw and I could be doing this for a while, exploring those extraordinary beaks and the way ravens change shape - sometimes sleek and slim, sometimes menacing and fluffed up (can a raven fluff?) 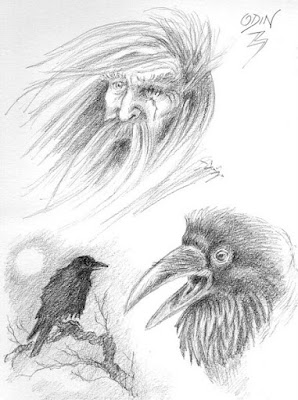 Odin, Hugin and Mugin
© Sue Wookey
This finally led me to the basis for a new painting I've just started. Here a raven has the sun in his beak (as in the Native American myths where Raven gave light to the world), but the light is at the heart of a maze - in other words in the heart of us, at the centre of our journey. The feathers are souls that the raven is guiding inwards. Mucho deep stuff there to explore. 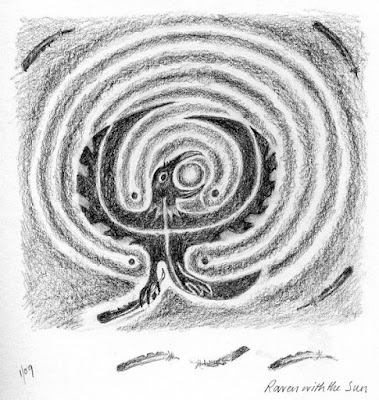 Raven with the sun
© Sue Wookey
On another tack, all the Odin related sketching led me to thinking about Sleipnir, his eight legged horse. I mean, how does an 8 legged horse work? After looking at some stuff and scribbling a bit, I came to the conclusion that the old Norse peoples had it right with their carvings. The only way to draw Sleipnir is from the side so you can fudge the massive space where all those legs are supposed to fit. That way he still looks horsey (i.e. elegant and streamlined) as opposed to looking like an oncoming tank that wouldn't fit though a barn door. So I finally managed to produce a Sleipnir I'm (fairly) happy with and had quite a bit of fun doing it. 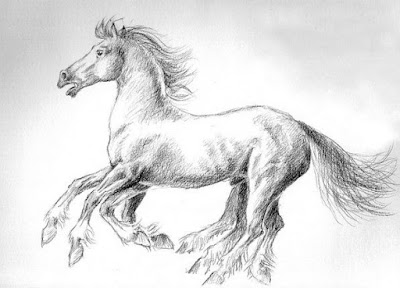 Odin's 8 legged super horse, Sleipnir
© Sue Wookey
I'd put Odin up on top of him but there is only so much fun one can cope with in one day.
Posted by Sue W at 19:50 4 comments: