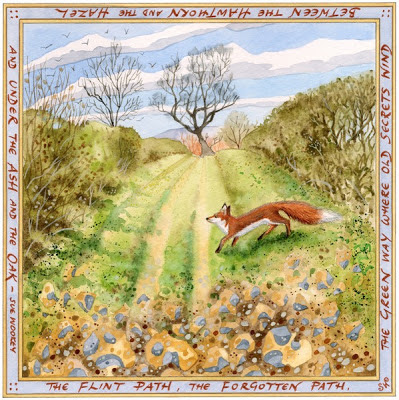 Yup - another painting of a fox! I just can't resist that russet fur. This one is just wandering casually onto the Icknield Way, England's oldest road, where people were tramping up and down long before the Romans came and made everything annoyingly straight. I've indulged myself by - possibly - overdoing the flints massing about at the bottom of the painting. I just love flint. And it's the bedrock of the Way around these parts. I've held this painting back for quite some time because I think I just over-flinted it (can one over-flint?), but going back to it recently I realised that I like it anyway, and the fox is super-foxy and deserves to be shown. The words around the border read:

The flint path, the forgotten path, the green way where old secrets wind
between the hawthorn and the hazel, and under the ash and the oak.
-SW 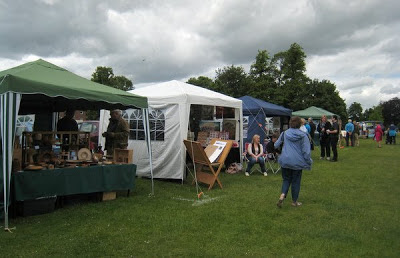 Well - Art on the Common took place last weekend on Harpenden Common and was a success, raising a nice sum for Cancer Research UK. But not without some trial and tribulation! I swore last year that I would never do it again after spending hours holding down a gazebo in a gale force wind, and by 2pm on Saturday I was wishing that I'd stuck to it.

It all started out OK with overcast skies and the odd smattering of light rain (see above). It was a bit of a pain covering and uncovering our precious stock and carrying our browsers under the cover of the gazebo, but we weren't complaining. At least, the others weren't. I confess to the odd bit of whinging and moaning. But then the heavens opened and it poured and poured and poured. Not just any old rain, but 45 degrees angled rain that would insist on joining us under our bit of green canvas.


Gazebo with everything out 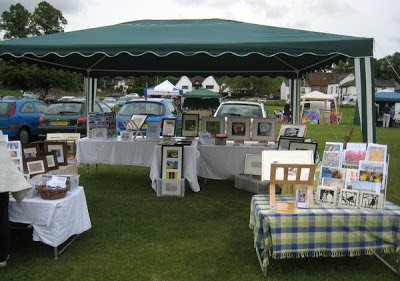 Gazebo with everything in (including us) 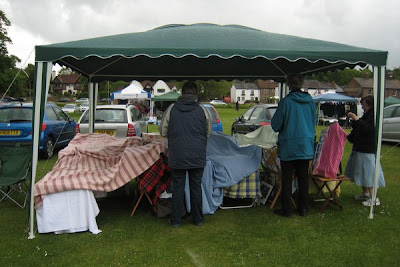 We threw everything we had over - well - everything we had. My blue Irish wool blanket started to smell like a very old wet sheep on a Kerry hillside. Pools of water built up on top of everything and we began to realise that we couldn't pack up without getting everything soaked, so we were pretty much stuck. Water started to gather in lakes on top of the canvas and Hillary got herself soaked trying to release it. I bet Picasso never had to do that. 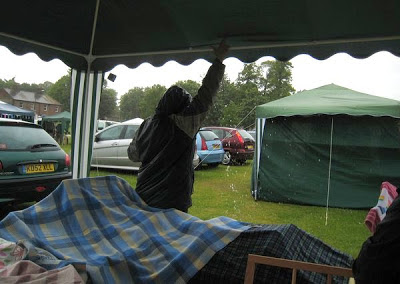 Eventually we decided that pack-up we must, so we started from the inside out, beginning with things that were a Bit Damp and progressing through the Rather Wet to the Jolly Well Soaked. We tossed it all higgledy-piggledy in our cars just as the sun came out. I could type a very rude word here, but I won't. Driving home in a very wet car, with everything gently steaming inside, I decided that this was it. Never again! But on Sunday, guess what? It was lovely. The rain mostly held off, the sun peeped in and out. We had so much extra space around us that we spread out and made a picnic area with seating for guests. We considered the benefits of hiring a triple pitch next year with a paddling pool and BBQ. Visitors came past steadily and bought things, and we said to ourselves 'How nice to be on Harpenden Common in a bit of sun and doing something worthwhile'. So - yes - see you again next year! 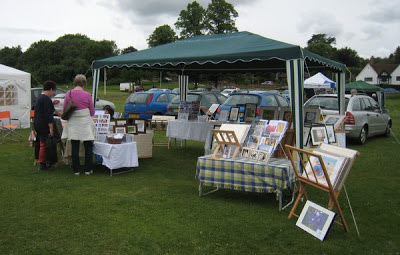 Time the sun came out

You might notice that the Blog looks a bit different! For the last couple of years I've had a cool (literally) background image of Galley Hill covered with snow. Perhaps it's the miserable weather we've been having - the T-shirt's have hardly seen outside a drawer - but I suddenly longed for something sunnier. So now the sun's out and the corn is as high as an elephant's eye. Well, maybe more like a hare's, but you know what I mean. Perhaps it will encourage the warm weather before this weekend's Art on the Common, the annual extreme arting on Harpenden Common in aid of Cancer Research UK. This year I will be sharing a double pitch with fellow artists Teresa Newham and Hillary Taylor, although we won't be sheltering under a full gazebo after last year's total gazebo failure! Come along and cheer us on, and support a good cause. Start praying now for fair weather and no wind as it's not looking so good....! 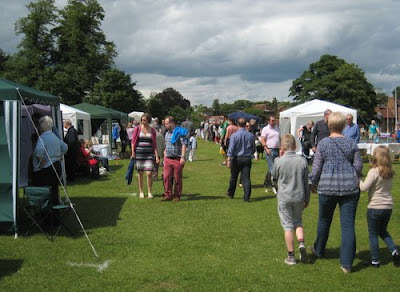 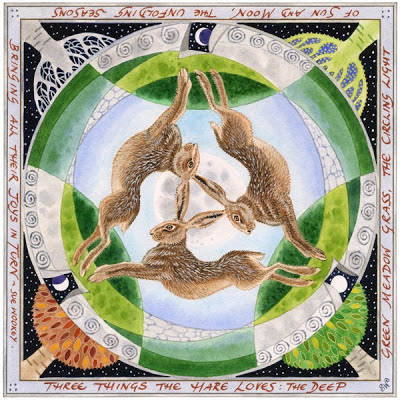 I've thinking about it for ages and have finally got down to it - painting another version of the Three Hares. I painted my first, Three Running Hares a few years ago (see below) and there was such a wonderful response to it I put it on all my publicity postcards. It also appeared in the Earth Pathways Diary, in 2011. But I've been painting a lot of hares since then and I know how much everyone loves them, so I wanted to visit this extraordinary symbol again.

This time I've tried to orientate the hares so that they form a clear upward pointing triangle. There is a moon in the centre (hares love the moon) and three ancient mounds containing three of its phases. The hares are contained in three interlocking circles, which I hope bring a sense of movement to the painting. I've surrounded the whole thing with trees representing the four seasons.

No one knows the real origin or meaning of this strange symbol, but it is found all along the Silk Road from ancient China to South West England, where it can be seen on church roof bosses and in stained glass. Adopted by the Cornish Tin Guilds it became known as the 'Tinners' Rabbits'. The Three Hares chase each other around and, in an optical illusion, share only three ears. It's one of the many symbols that contain a trinity, like the triskelion (the Isle of Man symbol) and the Celtic symbol of three interlocking spirals.

The words around the border are written by me and are - appropriately - a Celtic Triad :

Three things the Hare loves: the deep green meadow grass,
the circling light of sun and moon,
the unfolding seasons bringing all their joys in turn.

Prints of Three Leaping Hares can be ordered online from my website at Galley Hill Art. 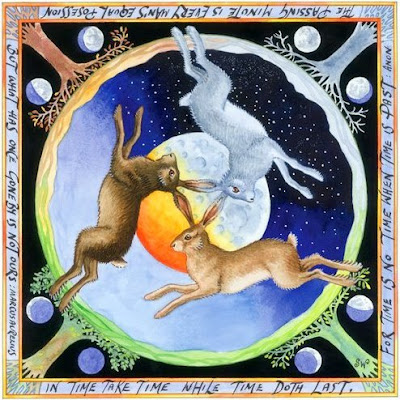