'Blow wind and crack your cheeks...' 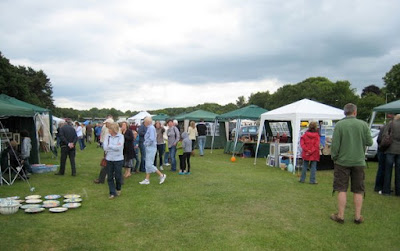 Art lovers braving the freezing north wind
© Sue Wookey
Well - I've now had my own blasted heath moment doing Art on the Common in Harpenden last weekend along with fellow artist Teresa Kirkpatrick (she has her own account here) and her trusty partner Jon who has more than earned his Artist's Assistant Gold Medal. Boy was it windy on Saturday. And cold. And rather scary. Although we had our gazebo roped and weighted down it was leaning at a very unfortunate angle as the north wind buffeted it. Sometimes it took all three of us to hold it up. And I spent the day wrapped up in a fleece and coat and I was STILL cold. Ah... the joys of a British Summer. Still, we stuck it out in a bloody-minded British sort of way. 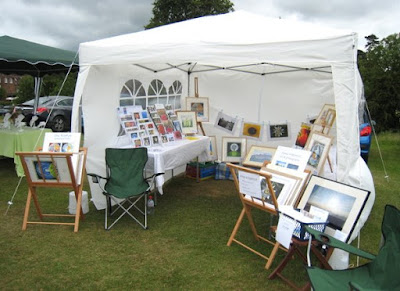 Our gazebo looking surprisingly upright
© Sue Wookey
On the Sunday we tied the gazebo down with enough string to wrap a herd of elephants and I wore a jumper. And the sun came out and blasted us in the inferno of our south-facing gazebo until I was reduced to a sun hat and factor 50 sun cream. Lucky I didn't have to plaster it all over my arms because of the Jumper. I now know how a Christmas Turkey feels. Frozen solid, gently defrosted overnight, then blasted in the oven until your skin is nice and crispy. Michaelangelo had years lying on his back painting the Sistine Ceiling and we had our 'suffering for art' baptism in the frozen wastes and searing desert of Harpenden Common. Ah.... just kidding. I think Michaelangelo wins that one. 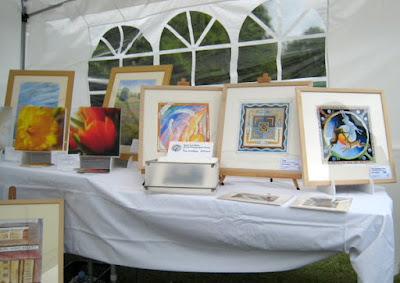 Some of our stuff before the wind knocked half of it over
© Sue Wookey
But - it was HUGE fun. We'll definitely do it again next year (and probably be better prepared). It was wonderful to meet so many art loving people, encouraging to hear their comments and sell stuff, and (even better) we had a nice cheque to give to Cancer Research at the end of it. I wouldn't have spent the weekend any other way!
Posted by Sue W at 12:48 No comments: 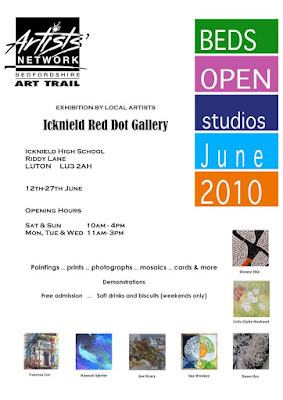 It's Open Studios time again and throughout June artists all over Bedfordshire will be opening their studios, demonstrating and exhibiting their work. I'll be sharing an exhibition at the Red Dot Gallery in Icknield High School, along with painters Celia Glyde Husband, Jan Drury, Hannah Spirito and Dawn Iles, mosaic artist Dionne Ible, and mixed media and collage artist Vanessa Lee. The Red Dot Gallery is a fantastic venue and there will be a wide range of styles and media - something for everyone!

Our exhibition will be open on Sat - Wed 12-16 June, Sat - Wed 19-23 June and Sat - Wed 26-30 June. Weekends 10 - 4pm and weekdays 11 - 3pm. On each day there will be at least one artist there to greet you and talk about the work. I'll be there myself on the 12th, 15-16th and 22-23rd and possibly some other days too. You can find out more about the Artists Network and Bedfordshire Open Studios here at the ANB website. There is more information about the Red Dot Gallery here.

It would be lovely to see some of you there - this is a great opportunity to find out how artists work in a variety of media, so stop by for a chat :- )